Evidence of a blocked or leaking sewer line

If you see any warning signs of a sewer line backup or leak, yikes! Call us asap for a free evaluation of the situation. Sarah D. is very glad she did —

“We contacted Schra Construction for an emergency repair to our main sewer line. Not only did Schra Construction work tirelessly throughout the night but the owner, Marc, was knowledgeable, fast and extremely efficient in replacing our main sewer line. We had contacted a few different companies and not only were they overpriced but were not available for our emergency. Marc took the time to explain everything in detail and diffused a very stressful situation. I will certainly be telling my friends, family, and colleagues about Schra Construction. Couldn’t be happier with the job they performed for us !!!!” 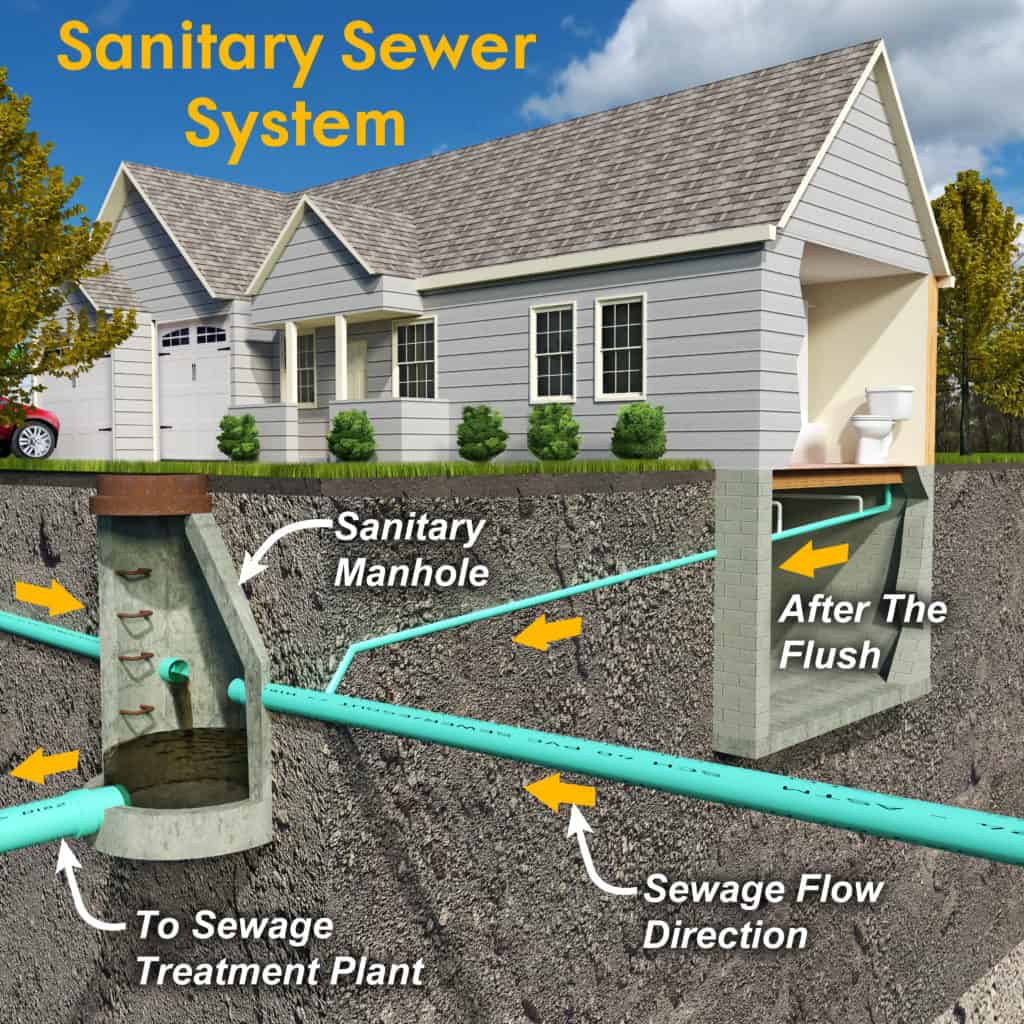 The sewer pipe from your house to the main line can break, clog, or leak and then must be repaired or replaced.

Kaci A., Windsor, Colorado – 5 Stars, Sept 2018 – Marc replaced my grandmothers sewer line in Windsor after Mr Rooter wanted to take my grandmother for a ride for her money and tear up her house. Five bids later from Mr Rooter I reached out further and found Schra Construction. The same day I put that into home advisor he was there. Came in way lower than Mr Rooter with way less hassle. Completed the job in two days. I would recommend Schra Construction over anyone else.

Ben G., Fort Collins, Colorado – 5 Stars, Aug. 2018 – Marc recently replaced our main sewer line that had backed up and clogged due to infiltration of tree roots. Another plumbing company had come out and unclogged the initial blockage, and quoted us ~$10,000 to fix the sewer line. Mark did it for under $5,000 and was in my opinion much more knowledgeable on the matter. The other service wanted to line the existing pipe with epoxy to seal it to prevent future root incursion, but Marc informed me that was not a permanent solution as the epoxy will eventually fail and recommended just replacing the pipe (this was also told to me by three other sewer repair companies as well). He said it is about half as expensive, but did tell me it would result in cosmetic damage to my lawn because of the digging. After scheduling the repair he replaced the line in less than two days. We would recommend him to anyone!

Les S., Boulder, Colorado – 4.5 Stars, Mar. 2018 – Nice guy and very knowledgeable in his trade.The job had some challenges that Marc attempted to resolve. I respect his work ethic and honesty. His skill on the backhoe is excellent but I think he could benefit from having a helper on projects like this one. Superior skills with a backhoe and by far one of the nicest and most honest people you’ll ever meet. It was a pleasure working with such a down to earth guy.

Paula C., Greeley, Colorado – 5 Stars, Mar. 2018 – Marc is definitely an experienced professional and watching him handle an excavator impressed me. He worked around our yard with ease and did the project in one day. He was considerate and his fee was very reasonable. I’d recommend him to anyone.

Dan O., Boulder, Colorado – 5 Stars, Feb. 2018 – Marc called immediately after I posted on Home Advisor, and came out the next day to take a look and give a very reasonable estimate. The job entailed demoing a large concrete patio, and then replacing a sewer pipe underneath. The demo work was precise and they were very careful not to damage any other part of the house. The next day, they replaced the sewer quickly and efficiently, and were happy to explain what they were doing. At one point, an issue arose and they had the opportunity to upsell us on additional work, however, they resolved the problem without any extra cost and without trying to sell us something we probably didnt need. I’m not sure most folks in the sewer business would have done the same. Throughout the process, they were straightforward, friendly, and they stuck to their word about what they were going to do, including a few extra things they could have easily skipped. At one point, they even helped us carry in some groceries to the house. The price was also very reasonable and they guaranteed their work. Would definitely recommend them to anyone looking for sewer repair.

Cynthia M., Loveland, Colorado – 5 Stars, Aug. 2017 – Not only did the repair man know his craft but he had what some don’t, work ethics and character!

Michelle C., Boulder, Colorado – 5 Stars, May 2017 – Marc took care of repairing our sewer-line from our house out to the main. They did a method which I believe is called “trenchless” (though they still have to dig a large, deep hole to access the line.) They essentially feed a resin soaked liner into the clay pipe and then expand the liner and allow it to harden. This saves the owner from the large expense of digging up the sidewalk and street. We were impressed by Marc’s thoughtful consideration of our project, the speed at which he moved our project along, the care he and his coworkers took in protecting our property (such as our concrete patio) such that we did not need to bear the expense of repairing that. The final cost was exactly what he quoted us. We were expecting to pay more so of course we were very happy with the price tag. Though we wish no one the expense of having to replace/repair their sewer-line, anyone who finds themselves in that situation would do well to call Schra!

Ann S., Fort Collins, Colorado – 5 Stars, Dec. 2016 – We had Schra Construction do a sewer pipe replacement on a mobile home in Fort Collins, Colorado. It was an urgent situation but they did not take advantage of that. Dependable company at a reasonable price. We are the owners of the mobile home park. In comparison, other companies have charged us thousands more. We will use Schra in the future.

We promise a fast response.

Think of us for outside plumbing construction, including expert excavation and grading work.

Free estimates – To solve your water main, sewer line, or septic tank problem, call us with any question. Serving Loveland and Northern Colorado homeowners since 1997.